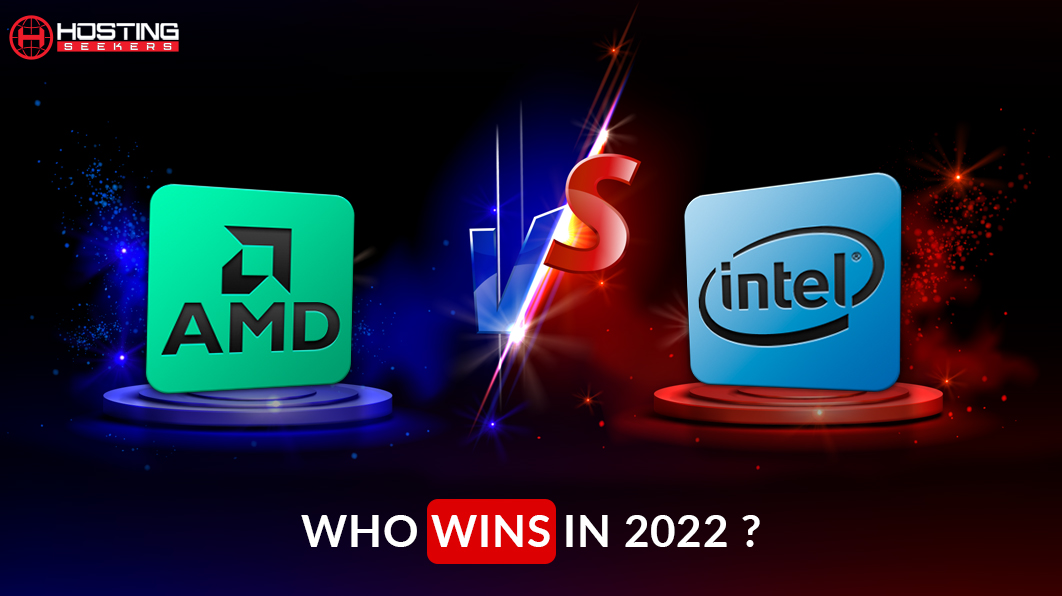 AMD vs Intel: Which CPU is Better?

When it comes to upgrading or buying a new PC, choosing between AMD and Intel is where most of us get stuck. This blog covers the never-ending argument on AMD vs Intel to help you make an informed decision.

Intel and AMD are the world’s highest valued semiconductor chip makers based on revenue. Both Intel and AMD are found in most processors of laptops and computers today. Hence, you might have observed these words written on your laptop.

While the suitability of these processors depends on the users’ needs and preferences, Intel and AMD are equally well-known and reliable brands. As these processors are not interchangeable, it is important for you to understand the terms and their features in detail.

Why do you frequently hear the names “Intel” and “AMD”?

In the CPU world, the two major competitors are Intel and AMD. Although Intel has been a leader since the early 2000s, there has been a drastic change in the industry in the last few years. This doesn’t necessarily mean Intel has an upper hand compared to all other competitors. Other players might just be after a different target audience.

For a less technically inclined person, it might be difficult to choose between these two processors. Though this sounds intimidating, the purpose and target market of both of these processors is different. Thus, it is important that the buyer first understands his own budget and requirements, and then chooses the processor.

This article gives a comprehensive overview of what Intel and AMD really are, the difference between AMD and Intel, and which option will suit your needs better. Additionally, we’ve answered the most frequently asked questions by the users related to AMD vs Intel CPUs.

Recommendation Read: NVMe vs SATA – Which is Better?

First things first, Intel is a 53-year old American multinational tech company. Intel supplies processors for computer system manufacturers like Apple, HP, Dell, and Lenovo. They also manufacture microprocessors, integrated circuits, and other devices that are related to computing and communication. In 1991, Intel became the biggest chip maker in the world and has held the position ever since, capturing a huge market share.

Here are the main advantages of using Intel processors: 1. Productivity: They provide remarkable performance for great productivity and entertainment at the same time.
2. Reliability: They are reliable across a lot of different platforms and service requirements as well.
3. Performance: They support demanding applications with high performance.
4. Security: They are enhanced with high-security features.

Intel has a broad range of processors for laptops, desktops, workstations, and server management. They have processors to fit the buyer’s needs. These work well for personal and business uses including, gaming, content creation, IoT, and artificial intelligence. The most popular CPUs are the Intel Core processors that target mid-range customers.

Understanding AMD In-Depth – What Exactly Does AMD Stand For?

Here are the main advantages of using AMD processors: 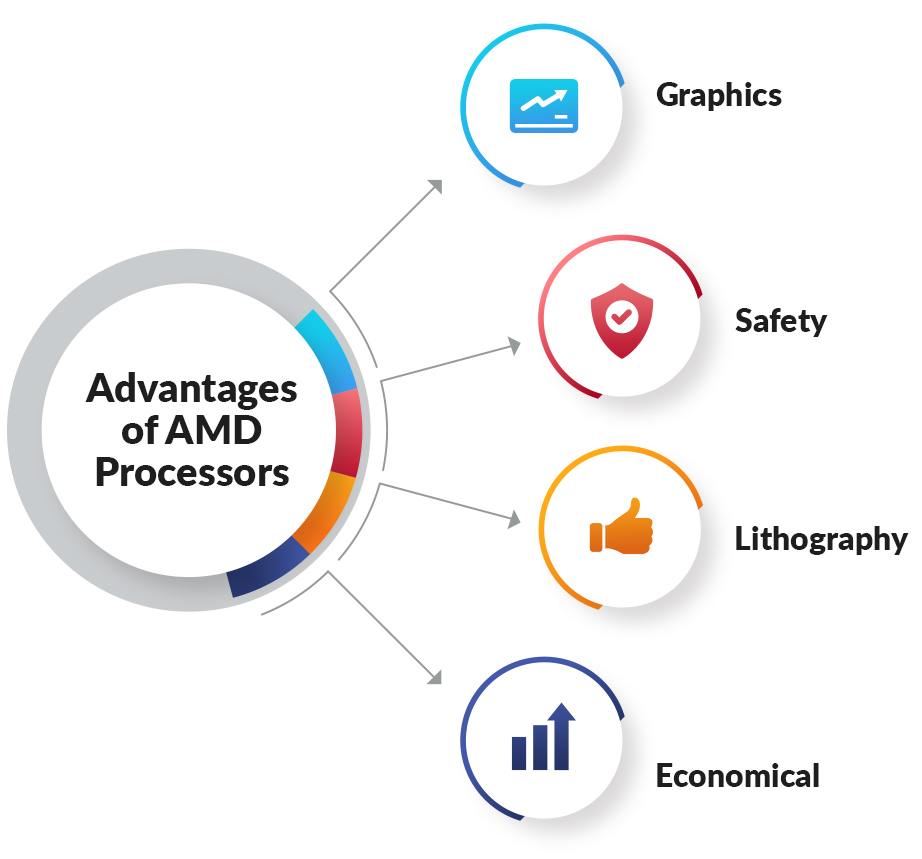 1. Graphics: AMD provides extraordinary graphics processors that are suitable for gaming specifically.
2. Safety: AMD can detect malware with its Enhanced Virus Protection feature.
3. Lithography: AMD has smaller lithography that does not cause the machine to heat up too often.
4. Economical: AMD targets groups of users that have lower budgets.

Offering a wide range of processors, AMD is a popular choice for buyers with a budget constraint, requiring high graphic quality and efficiency. It is also a reliable choice similar to its main competitor and is, therefore, preferred by users focusing on graphics and curbing expenses.

AMD vs Intel: 7 Major Differences between Intel and AMD

Intel vs AMD has been a debate between content creators, PC gamers, and PC builders for a long time now. Intel and AMD are the top competitors in the CPU market – be it for workstations or for gaming. Comparing devices like laptops is difficult today since they are identical except for the CPU. Different factors like budget and specific requirements affect the choice that the buyer makes since the layout and infrastructure are completely different for both.

Here are some of the significant differences between Intel and AMD processors:

AMD and the Intel CPUs offer performances that are very similar to the others. However, each of these specializes in specific things and also targets different sections of users. For example, AMD processors are known for better results in multi-tasking. This is one reason they are recommended for those who do not want to shell out too much money on laptops. Intel CPUs, on the other hand, are best for single-core tasks. They are faster but might be more expensive.

However, AMD CPUs tend to offer better value for money. For gamers, a low-end segment laptop with an AMD processor also might give good results. However, users believe that Intel offers better performance for a higher price, but an AMD is a more reasonable option for a processor. For audio-video production or sound editing, Intel-based machines prove to give better outcomes.

AMD has successfully been able to provide cheaper alternatives to CPUs in the last few years. Comparing AMD’s Ryzen 3 with Intel’s Core i3 processor, the former ranges between $95 and $120, while the latter ranges between $97 and $160. The lower price offered by AMD is one of the reasons why everyday users have started shifting to AMD from Intel in the last few years.

Those who know the industry well have always been worried about the vulnerabilities of processors that might ultimately harm the users. However, there has been no clear conclusion to the Intel vs AMD debate when it comes to security. Intel however has 242 publicly disclosed vulnerabilities while AMD only has 15. Thus, we might say that AMD is more secure than Intel since the gap of vulnerabilities is too huge.

Both Intel and AMD have dedicated web pages to support their customers. Comparatively, Intel has a stronger community presence online. They have a detailed blog and interactive customer support. Intel also offers its customers round-the-clock phone and chat support. AMD allows its users to check details of their products, for example, warranty. They also have a detailed page with frequently asked questions to help their users.

These are the set of differences that might help a user decide on the priority features and then go ahead with either one of the two. We recommend understanding your needs and then reading the above points to see which option fulfills most of your needs before settling a choice.

Ans. According to experienced users and experts, there is not much difference between AMD and Intel when it comes to reliability. Even though the efficiency and products might be different, they are both equally reliable. This also explains why they are tough competitors in the market.

Q 2. Are Intel and AMD the same for laptops?

Ans. This depends on the user of the laptop completely. If the user is choosing a high-end laptop and expects faster and better performance at a higher rate, then Intel might be a good choice. If the user does not want to spend too much money on the laptop and its processor, AMD gives great value for money at affordable prices.

Q 3. Which processor is better for gaming?

Ans. When it comes to gaming, experts in the industry tend to trust Intel more than AMD. Speed and graphics are two main components that users generally look for in a good gaming processor. Intel beats AMD when it comes to speed, but AMD offers better-integrated graphics performance.

Q 4. Are there similarities between Intel and AMD?

Ans. Ryzen is the most popular brand of microprocessors designed by AMD. AMD launched its first-generation Ryzen in 2019 and has a range of both CPUs and APUs. There are different versions of Ryzen – Ryzen, Ryzen Pro, and Ryzen Mobile. Ryzen has a smaller transistor, fewer shared resources, and an improved intra-processor link.

Q 6. Is Ryzen better than Intel for everyday use?

Ans. Ryzen by AMD is more affordable and thus makes a better choice for everyday use. It has excellent graphics, which is a feature most regular users look out for. When it comes to Intel, it is better for high-intensity activities like video editing and gaming.

Q 7. Why is AMD cheaper than Intel?

Ans. In the pricing difference between AMD and Intel, AMD is significantly cheaper than Intel when it comes to microprocessors chips and CPUs. Experts say that Intel is more expensive because of its brand name. However, there are also talks about both AMD and Intel specializing in different features and targeting different groups of users.

Ans. CPUs in general are considered to be the most durable part of a device. Some professionals believe that AMD and Intel are equally durable. However, AMD users generally see more issues because they tend to use the processor more and at a faster speed than usual. Intel on the other hand limits this kind of overclocking. This is a reason most people also believe that Intel is more durable than AMD.

Ans. No, Intel is faster than AMD. Intel is said to be much faster than AMD, but only after a specific point. If a user only considers everyday activities, then both AMD and Intel offer the same speed. However, if a user uses AMD CPUs more than they should, there can be a case of overclocking.

Q 11. Can an Intel CPU be replaced with AMD in a laptop?

What is Server Management & What does it matter?

Both Intel and AMD have been dictating the processor world today. There are some differences that make each one of these special and more suitable for a certain group of users. However, the user has to determine the budget, requirements, and different activities. According to these factors, the user can then easily decide which is better in AMD vs Intel.

This is an important choice that can decide the working style of a user for a few years, especially since these cannot be replaced or changed once used. While Intel has been leading with a majority of the market share since its inception, it has had continued support from its loyal customers. However, it is predicted by experts that AMD will steal a significant part of it and give Intel more intense competition in the coming years.